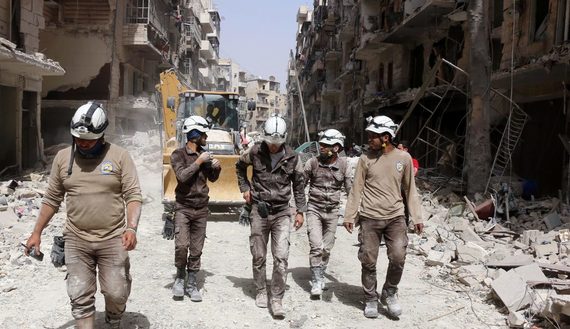 Syria—Bombs fall from the sky, and entire villages lay in ruins as terrorists heartlessly destroys countless homes and lives. Among the chaos, men in halos - or rather, white helmets - risk their lives; pulling bodies from the rubble and assisting in the cleanup of the catastrophic area. These men are in the Syrian Civil Defense, more commonly known as the White Helmets. A documentary featuring the organization was recently recognized at the 89th Academy Awards on February 26th as the “Best Documentary Short Subject”. Along with their Oscars win, the group has received tremendous amounts of international support, but also criticism from others.

The White Helmets are a volunteer organization based in Syria that is dedicated to providing emergency medical service in the Syrian Civil War. The organization was founded by locals, ex-British army officers, and ARK (Analysis Research and Knowledge), and volunteers are trained in Turkey by the ARK and the Turkish NGO - a human rights and freedoms and humanitarian relief group. They receive funding from the United States and European governments, which adds up to a total of $26,000,000. The money is put to good use, as in their 3 years of operation, they have saved over 80,000 lives. On the converse, around 160 emergency workers have lost their lives working to help others. These volunteers are carrying what seems like the weight of the world on their shoulders, trying to save as many lives as they can.

The White Helmets documentary, which follows three volunteers, has brought a lot of attention to the group and to the problems in Syria. Members of the organization have been recognized as heroes, and they were even nominated for the Nobel Peace Prize. The group is a leading resource for journalists and human rights groups that are seeking information about the war, whether it mortality rates or weapons used.

The documentary has also triggered a wave of criticism and accusations for the group. According to a United Nations (UN) investigations on the White Helmets, there were several discrepancies in volunteers’ stories. Two of the volunteers, Ammar al-Selmo and Hussein Badawi, had conflicting stories about an attack, with one claiming that that the culprit weapon was a barrel bomb and the other saying that it was four consecutive rockets. As well as this, Selmo varied between two different claims of his location during the attack. In one interview, he claimed that he had seen the bomb from a kilometer away. In a later interview, he revised his claim, saying that he heard the bomb from across the street rather than saw it.

A site assessment was also conducted, and the UN found that the White Helmets’ story does not match up with many pieces of physical evidence. Though these allegations of fraud may be true, the United Nations report may not have been entirely credible. The UN account was not supported by satellite imagery or any photographic evidence, while the White Helmets did provide such information.

Along with the UN investigations, the Russian Embassy in the U.K. also commented on the White Helmets. After the group’s Oscar win, this tweet was posted from the Embassy’s twitter: “Russia welcomes #Oscars award for ‘White Helmets’ film. Indeed, they are actors serving an agenda, not rescuers.#Oscar Mistake”. The White Helmets believe that the tweet was part of a continued attempt by the Syrian president Bashar al-Assad and the Kremlin to delegitimize the group. The agenda of the White Helmets threatens Assad, and the group has often called him, as well as Russia, out; claiming that they are a part of the threat. Likewise, the Russian government believes that the White Helmets are a terrorist group in disguise, like a trojan horse.

As for the White Helmets themselves, most of them are - although afraid - eager to be saving lives and helping to rebuild their country. Khaled Khatib, a cinematographer and press officer for the White Helmets, stated, “I wish this war would stop tomorrow. We want to rebuild Syria, rebuild the stores, hospitals, the markets and the universities. We want to liberate Syria and let the refugees return to the country." The volunteers know that although the duty that has been bestowed upon them is difficult, they are all making a difference and fighting for something they believe in. These men have hopes for a better and brighter future for Syria.

Husam Mudiratee, a White Helmets volunteer and policeman, recounts the first life he saved to CNN in a reflective way, of sorts: “A two-story building collapsed. We found an 11-year-old boy crouched in the corner, safe. “It was the first life I rescued and if I never save another life, that will be enough."